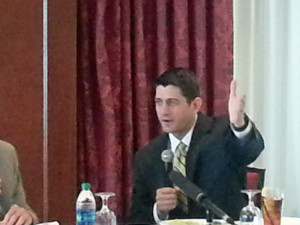 Wisconsin Congressman Paul Ryan (R-WI) is working on a book that will be released next year, and the former vice presidential nominee is offering some details about what the text will focus on. Speaking at a WisPolitics event in Madison last week, Ryan said the book will focus on the future of the conservative movement, along with what he believes are improvements the Republican Party needs to consider “if we want to be a majority party in this country.”

Ryan says the book will reflect his beliefs in natural law, natural rights, and that the “role of government is to provide a quality of opportunities so that we can make the most of our lives,” something he says Republicans have not done a good enough job of articulating that or in putting up policies that achieve those goals.

Writing a book can be an early indicator that a politician is considering a presidential run, but Ryan says he’s focused on the job he has right now. He says it’s not right to “cloud my judgment with other personal ambition concerns.”

Ryan says there will be plenty of time to think about other opportunities later.