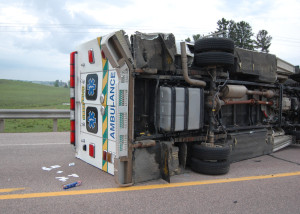 The city of Greenwood ambulance takes a beating Saturday morning after getting hit by a car at an intersection, sending four people to a nearby hospital and resulting in one arrest for possible drunk driving. Nobody was killed.

Clark County Sheriff’s Department officials arrive to find the bus north of the County Highway H and State Highway 73 intersection lying on its side. A car was found to have significant damage at the scene.

According to a press release, the preliminary investigation indicates the car’s driver, 35-year-old Kevin Colby of Loyal, went through the stop sign and then struck the rear corner of the ambulance, causing it to spin, overturn, and slide down the road. That happened just before 4:00 am Saturday, just north of Neillsville and south of Greenwood. Colby and his passenger, 35-year-old Angela Colby, were taken to Ministry St. Joseph’s Hospital in Marshfield with non life-threatening injuries, according to the Sheriff’s Department. 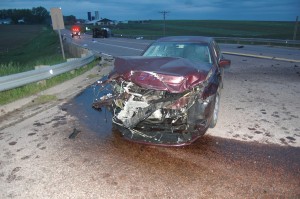 The driver of the ambulance was not injured, but two EMTs were taken to the hospital for treatment of injuries, also believed to be non life-threatening.

The ambulance was returning from a call and no patient was in the vehicle at the time of crash.

Kevin Colby was arrested on suspicion of Operating a Motor Vehicle While Intoxicated.