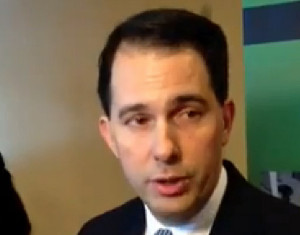 Governor Scott Walker said Thursday that he does not check to see whether people he nominates to fill positions such as UW System regent signed the recall petition against him two years ago. “I don’t do anything in that regard, but in terms of that . . . my comment is just going to be that we withdrew the nomination, and there’s plenty of other good candidates we’ve looked at, and will look at in this case,” Walker said.

The case is that of UW-Plateville student Joshua Inglett, nominated by Walker for a two-year term as a student regent, a nomination abruptly withdrawn after a conservative website outed Inglett as a petition signer. Inglett has said he was never asked if he’d signed the recall until the governor’s office called him on it. The governor is keeping tight-lipped on that.

“I wasn’t involved in that directly,” Walker told reporters following an appearance in Madison. “I’d just say, in the interest of not pulling him through the details on this, we withdrew the nomination and we’ll be submitting another name.”

Walker’s office announced the nomination of Inglett earlier this week, along with former State Auditor Janice Mueller and former Republican Lieutenant Governor Margaret Farrow. “We’ve got plenty of good candidates,” said Walker. “We’ll be submitting the name of another student to be one of the regents.”

Assembly Speaker Robin Vos, asked for his comments, questioned Inglett’s integrity. “I’m disappointed that the nominee decided not to disclose that. I think in the environment we’re in today, that would have been important information for the governor to have prior to making the nomination. The student chose not to disclose that, and I think the governor’s made the right decision, because somebody who’s not forthcoming before they’re even nominated, I would have questions about their integrity overall,” said Vos, who served as a student regent from 1989 to 1991. “That’s something that should have been disclosed by the student . . . so that the governor could make a fully informed decision.”

UW-Platteville Chancellor Dennis J. Shields defended Inglett in a posting on the school’s website. “Joshua Inglett would have made a fine representative on the UW System Board of Regents,” Shields said. “Joshua is an outstanding young man, majoring in engineering physics at UW-Platteville. He exemplifies the values of high academic standards, strong leadership skills, entrepreneurial spirit and campus engagement we expect from our student body. We are proud to call him ours.” 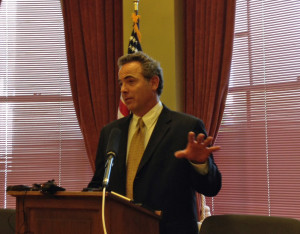 State Senator Jon Erpenbach (D-Middleton) has sent a letter to Walker with, he said, Inglett’s approval, asking the governor to reverse the decision. “The governor selected him. He was never asked, up until last night, when apparently a conservative organization found his name on the recall petition. The recall petition doesn’t matter,” said Erpenbach. “This is a college kid, versus a guy who’s talking about running for president. It was a pretty gutless move, it really was.”

Senator Dale Schultz (R-Richland Center), whose district includes the Platteville campus, also sent a letter to Walker asking him to reconsider the decision. “It seems to me this young man was caught up in the emotion and fervor of our state’s ‘civil war’ of just over two years ago,” Schultz said. “How active he was in the affair is debatable, but it appears he did nothing more than sign a petition.”

As of Thursday, Inglett’s name did not appear on the agenda of the  Senate Committee on Universities and Technical Colleges, which met to confirm the Regent nominees prior to confirmation by the full Senate.