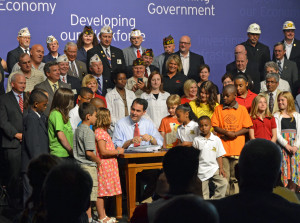 The state budget is signed – but the debate over it likely is far from over. It’s “a great budget for the hardworking taxpayers,” according to Governor Walker, who signed it Sunday at the Pleasant Prairie business of a campaign contributor.

“This budget includes nearly $1 billion worth of tax relief for individuals, for small business owners, for key industries in this state,” Walker said during the signing ceremony held at Catalyst Exhibits.

Walker, who did not take questions from the media following his remarks and the signing ceremony, touted a $651 million income tax cut. “This is a budget that is good for the people of Wisconsin,” he said.

But Democrats, who spoke later at Kenosha city hall, said there’s less there than meets the eye. “The part the governor doesn’t want the middle class to know is that they’re not going to get hardly any benefit whatsoever,” said Assembly Minority Leader Peter Barca. “The average tax cut for the average working family will be less than $10 a month. Those making over $300,000, said Barca, will see closer to $125 a month in benefit from the tax decrease.

The governor issued 57 vetoes, including provisions allowing “bounty hunters” in the state, evicting the Center for Investigative Journalism from the UW Madison campus, and bypassing a 1,000 student cap on school choice expansion statewide.

Thanks to Janet Hoff, WRJN