You are here: Home / Business / Mercury Marine launches another expansion 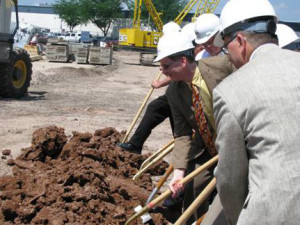 Mercury Marine is moving forward with a $20 million expansion project in Wisconsin. The company broke ground Thursday morning on 38,000 square foot addition to two buildings at its Fond du Lac facility. It’s the second major construction project launched at the plant in the past year.

Company President Mark Schwabero says they made the right decision to consolidate operations in Fond du Lac back in 2009 and he’s glad they have been able to demonstrate that the plans and commitments they made were the right ones.

Fond du Lac City Council President Sam Meyer says the city, county, and state made the right gamble in putting together incentives to keep the company from relocating to Stillwater, Oklahoma. Meyer says he’s excited to see those investments “come to fruition.”

The company has invested more than $40 million in to expansion efforts, including a similar groundbreaking last September. The current expansion will bring the company’s manufacturing space in Fond du Lac up to 1.5 million square feet.