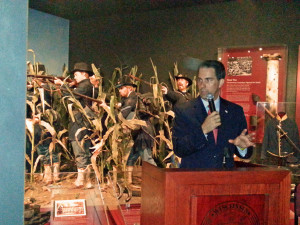 “I haven’t said this; others have called them ‘eco-terrorists’, but I think it’s not too far removed from that. These are people who came in and their intent was to cause fear.”

The presence of armed military-style security guards at the iron ore site in the Penokee Hills drew fire this week after photos of the controversial camouflaged guards were circulated through online social networks. Video that has gone viral shows masked mining opponents harassing the workers and one person is seen struggling to steal a cell phone.

“The irony is,” Walker says, “the angst seems to be focused at the company and not at the people who came in masked like ninjas on personal property violating the law by trespassing in a place they have no right of being and physically accosting people.”

While the land is private property, it is regulated by the state under the Wisconsin Managed Forest Law. That means the public has access to privately-held forested land for hunting, hiking, sight-seeing, and other recreational activities. The landowner benefits from lower property taxes.

Governor Walker says Gogebic not only has a right to protect the site, the company has an obligation to do so. “I can certainly understand the concern that a private business would have when you see the video of their employees not only being verbally abused, but in one case being physically attacked. There’s no place for that in the state of Wisconsin.”

It’s the job of local law enforcement to maintain control of the area, although Walker didn’t rule out offering help from the state in the future, if needed. Gogebic spokesman Bob Seitz had said the guards were needed after several masked intruders attacked drilling sites last month, slashing tires and damaging equipment. He said it’s important to provide a safe working environment.

Gogebic Taconite has recently asked some of those guards to stand down after it was discovered Bulletproof Securities, the Arizona company providing the guards, was not licensed to operate in Wisconsin. The company is applying for the proper state license. Other security guards remain in place. The governor says he’s not doing anything to speed up that application process.

Senate Democrat Bob Jauch (D-Poplar), whose district includes the mining site, has called the photos of camouflaged guards “horrifying,” saying this kind of “quasi military action” is common in third world counties or war zones but doesn’t belong in Northern Wisconsin. Jauch, along with Representative Janet Bewley (D-Ashland) — whose district is also up north — put out a call to remove the guards. The lawmaker who also opposes G-tac’s mining plans says the small group of protesters are not terrorists, but he does call them “idiots.”

A leading critic of the iron ore mine is urging protesters to stop the violence. Bad River Band of Lake Superior Chippewa Chairman Mike Wiggins is concerned about water pollution going downstream from the mine to his reservation. In a statement Friday, Wiggins said the tribe “condemns any planned or improvised act of violence or vandalism” against the mining firm. Wiggins says opposition to the mine needs to focus on litigation and information.

Gogebic workers are doing exploratory drilling on the proposed $1.5 billion mine and Walker says the irony is that the extreme protesters are trying to block the very science they say will prove the mine is bad for the state. The governor says he hopes the tension doesn’t escalate any further.

AUDIO: Walker says “hopefully coller heads will prevail,” though he’s concerned that people are unlawfully entering private property and forcibly taking actions against individuals who are employees of a private business in the state. :18

Governor Walker reacted to the tensions at the mining site after a speaking appearance at the Wisconsin Veterans Museum in Madison Thursday evening, where a grand opening was being held for a new Civil War exhibit.

In a statement Friday afternoon, the governor says these extremists — who are disrupting work and causing harm to law-abiding employees — should be prosecuted to the fullest extent of the law. Walker says he spoke with the Iron County Sheriff to offer any assistance that may be needed. He adds, the laws of Wisconsin will be upheld.