You are here: Home / Brewers / Adams powers Cardinals past Brewers 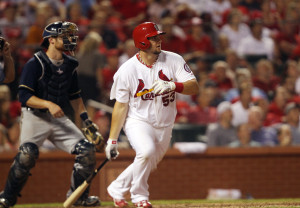 The Cardinals won their fifth consecutive game to maintain a one-game lead over the Pittsburgh Pirates and a three-game lead on Cincinnati in the NL Central.

The Brewers wasted another solid outing by a starting pitcher.  Pitching on 10 days rest, Marco Estrada didn’t allow a hit until two outs in the 6th inning.  Over 6 2/3 innings, Estrada allowed two hits and one run with three walks and six strikeouts.

With the score tied 1-1 in the eighth, the Cardinals loaded the bases with one out against reliever Brandon Kintzler, who had recorded the final out in the seventh.  Michael Gonzalez then took over and the results were a disaster.  Carlos Beltran’s sacrifice fly scored the go-ahead run and catcher Jonathan Lucroy and two-run homer by Matt Adams.

The Brewers have dropped 3 of their last 5.  They’ll try to salvage the final game of the series in St. Louis tonight.