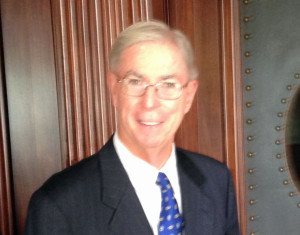 State Senator Tim Cullen won’t seek reelection at the conclusion of his term next year. Cullen, who was elected to the Senate in 2010 after prior service in the 1970s and ’80s, said Thursday that he’ll work on issues of education and poverty when he leaves office.

“I believe we are on this earth to give rather than to receive,” Cullen (D-Janesville) said. “I’m not proud or pleased by the fundamental conclusion I have reached, that is that I can make a bigger difference in my community as a private citizen than I can in this political environment that we now see as Wisconsin state government.”

Cullen was first elected to represent the 15th district in 1974, and served until 1987. “People often refer to me as a moderate. I don’t really think I’m a moderate, I just think I’m someone who’s willing to compromise.” He said Democrats and Republicans were more willing to compromise than they are now. “You come to Madison, and compromise is borderline a four letter word,” he said. “It means that you’re a RINO (Republican In Name Only) if you’re a Republican or a sellout if you’re a Democrat.”

Cullen said the current partisan redistricting process doesn’t serve the interests of voters. “You not only create safe districts for the majority parties for the majority party, in doing that you create safe districts for the minority party. More and more legislators only have to worry about a primary, they don’t have to worry about a general election. If they had to worry about a general election, they’d have to compromise. These gerrymandered maps do not produce legislators willing to listen to a range of views before they make up their mind. If they had to run in competitive districts, they’d have to act that way.”

Cullen said he has no plans at this point to endorse a successor, but will wait and see who runs. “I want to at least leave that opening, because I don’t know what the primary field looks like,” he said. “If we’ve got somebody that I really think is terrific, and somebody that I don’t think too much of at all, I might endorse somebody.”