You are here: Home / News / GAB to be audited 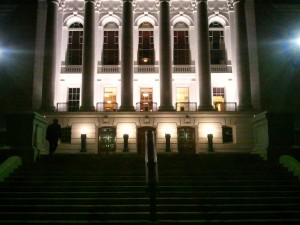 The Joint Legislative Audit Committee approves an audit of the Government Accountability Board, the first for the GAB. The 10-0 vote came on Tuesday. Committee co-chair Senator Rob Cowles (R-Green Bay) says the thorough “broad-scope” review will inspect a number of aspects of the state elections agency. “I think it’s worth emphasizing, this is a major audit … this is six months … this is a big one.” State Auditor Joe Chrisman confirmed that it would likely be spring before the audit is complete.

Kevin Kennedy is director and general counsel of the GAB. He says members of the board make every effort to ensure business is conducted in an open and transparent manner; even so, he says they embrace a fresh set of eyes. Kennedy says the nonpartisan Legislative Audit Bureau can recommend improvements. “We expect that the audit — as a tool for both this committee and as an opportunity for the public to look behind the curtains of vital processes of government — is something that is essential and something that we support.”

Representative Melissa Sargent (D-Madison) says the audit would provide the GAB with feedback that would help to improve voter confidence in the election process. She says the review is not intended to create ways to take power away from GAB. “We need to make sure that we’re strengthening this organization through this audit, not dismantling them.”

The LAB will examine various aspects of the board’s operations, including management, spending, and complaints of voter irregularities and how those complaints are handled. Cowles says if there are any problems at the agency, they will be found and fixed. “We want our elections to be run efficiently and carefully and honestly as possible.”

The GAB was created in 2007 and officially began work in January 2008. It replaced the State Elections Board and the State Ethics Board and is charged with oversight of Wisconsin’s campaign finance, elections, ethics, and lobbying laws. The board is made up of six former judges.