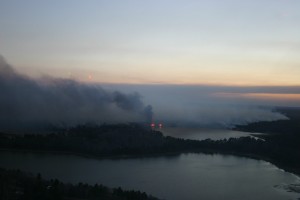 The state Department of Natural Resources is billing a commercial logging operation $600,000 for starting a wildfire that caused widespread damage in northern Wisconsin. The DNR says an investigation found Ray Duerr Logging was negligent in maintaining fire suppression equipment on the machinery that sparked the blaze on May 14. The Germann Road Fire destroyed more than 7,400 acres of land and 47 structures, including more than a dozen homes and cabins.

The logging company initially told investigators its crews tried to put out the fire, which started as a logging crew was harvesting timber in Douglas County. However, DNR Bureau of Forest Protection director Trent Marty says the company failed to maintain equipment at the logging site that could have prevented, or contained the fire and also withheld information from department law enforcement officials investigating the fire.

Tests of the fire suppression system found the air pressure was at two pounds per square inch, even though the owner’s manual indicated a pressure of 55 psi was needed to operate properly. Marty says the investigation determined that the crew had attempted to use the water system to extinguish the fire and water “dribbled out” since it had not been pressurized.

Marty says no criminal charges will be filed, since there was no “willful intent” to set the fire.