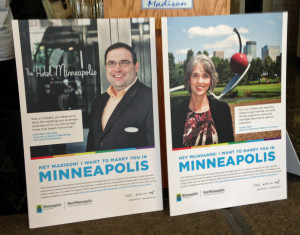 The mayor of Minneapolis hopes to make his city a midwestern Mecca for same-sex marriages, even as Wisconsin continues to place roadblocks before such couples.

Wisconsin has had a constitutional prohibition against same-sex marriages in place since 2006. Minnesotans rejected a ban on same-sex unions last year. The legislature in St. Paul passed a bill allowing them in May, and the law went into effect August 1st. Rybak has been promoting his city as a same-sex marriage destination across the Midwest.

“Until Wisconsin gives the same rights to all of its residents that Minnesota has, we are openly welcoming all same-sex couples to come on up to Minneapolis and get married,” said Rybak, who made stops Monday in Milwaukee and Madison, where his message was well received by Mayor Paul Soglin.

“This is something that’s going to put Wisconsin at a disadvantage, until we recognize the fairness of marriage for all individuals,” said Soglin.

Rybak said his state’s law puts Minnesota at a competitive advantage. “I don’t want to pitch this as a long-term economic advantage over the two states, but short-term, it is more advantageous for a same-sex couple with an entrepreneurial business to locate in Minnesota than it is in Wisconsin,” he said. “Take that advantage away from us. But until you do, come on up and have a good time in Minneapolis.”

Rybak’s Wisconsin trip comes as the Wisconsin Department of Revenue announced that legally married same-sex couples in Wisconsin will be required to fill out a special form and file their Wisconsin income taxes as individuals, even though they can file their federal taxes as a married couple.