You are here: Home / Packers / Packers down to 53, but it may not be final

The Green Bay Packers got their roster to 53 players on Saturday, but they likely still have more moves to make before they face the San 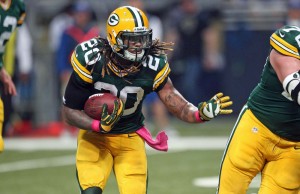 Alex Green among those released on final roster cut down

Vince Young appeared to have a spot on the team going into the final preseason game at Kansas City.  His performance forced the Packers to go a different direction.  With Young’s release, the Packers have only B.J. Coleman in a backup role at this time, but that will likely change soon.  The Packers could look to add the likes of Seneca Wallace, David Carr and Jimmy Clausen, all of whom are available.  They’ve also reportedly signed former Wisconsin Badger Scott Tolzien to the teams practice squad.

Some of the players that made the final 53-man roster are defensive linemen Johnny Jolly and Josh Boyd.  They also went with rookies Andy Mulumba and Nate Palmer at outside linebacker.  At safety, Chris Banjo was a late arrival, but he earned a spot as the Packers 4th safety.

Following is the list of cuts the Packers made to reduce their roster to 53 players: