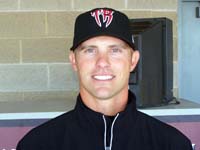 native Matt Erickson will manage the Class “A” Timber Rattlers in 2014.  Erickson started his coaching career in 2009 as the Rattlers hitting coach, returns to manage the club for his fourth straight season.

The Appleton West grad has a 204-209 record in 413 regular season games with the Timber Rattlers.  He is currently second in career regular seasons wins as a manager in Appleton.

Erickson was the manager of the Timber Rattlers when they won the Midwest League title in 2012, the first pennant in team history.

The Timber Rattlers will open the 2014 season on Thursday, April 3 at Fox Cities Stadium against the Peoria Chiefs.