You are here: Home / News / Jauch calls it quits 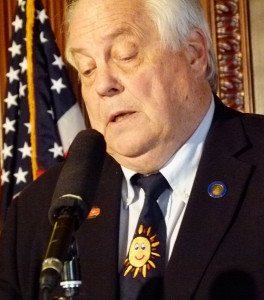 Senator Bob Jauch announces his retirement from the Wisconsin legislature as of January 2014 (PHOTO: Jackie Johnson)

An emotional announcement from longtime lawmaker Senator Bob Jauch (D-Poplar). “I will not seek reelection and therefore will retire at the end of 2014. Obviously this is an emotional and difficult decision to announce.”

The 67-year-old veteran legislator was first elected to the Assembly in 1982. He made the transition to the Senate in 1986 where he has remained ever since.

During his announcement late Wednesday morning at the Capitol, Jauch touted his accomplishments. He said after traveling almost 750,000 miles, being involved in several contentious issues, and maintaining the same amount of passion and intensity for 31 years, he’s “worn out.” He said, “I simply do not have the energy to maintain that commitment in a political landscape where representative democracy is on life support. I simply do not have another 125,000 miles in my tank.”

Jauch is an outspoken critic of legislation that makes it easier for Gogebic Taconite to open an iron ore mine in the Penokee Hills, which falls in his district in northern Wisconsin. In making his announcement to reporters, Jauch cited polarization at the statehouse. He said moderation has been lost. Senator Tim Cullen (D-Janesville) shared that same sentiment when he announced his retirement just last month.

Jauch said he wants to focus on improving the democratic dialog and encouraging citizens to be more civically engaged. He said, “We need a public that is less inflamed and enraged, more informed and engaged.” Jauch said the government is no longer transparent; there’s too much influence from special interest. Jauch’s senate district covers a big chunk of northwestern Wisconsin.