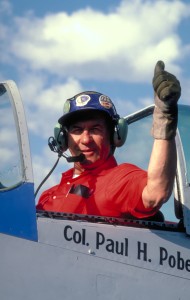 Lawmakers recognize the life and public service of Paul Poberezny.

Democratic Assemblyman Gordon Hintz represents Oshkosh. “The Poberezny name is synonymous with aviation and specifically the Experimental Aircraft Association — or EAA — that he founded. By extension, it’s also synonymous with Oshkosh.”

The former military pilot, who died less than two months ago, started a club for recreational flying enthusiasts 60 years ago with just 35 people in Milwaukee. Poberezny moved the EAA to Oshkosh in 1983; the aviation club has grown to over 180,000 members in more than 100 countries.

Poberezny’s son Tom tells lawmakers on the Assembly floor that his late father was neither a Democrat nor a Republican, just a life-long Wisconsinite. “Many people talk about Oshkosh in terms of numbers — hundreds of thousands of people, economic impact — but the real impact that Oshkosh had on this state is promoting it as a brand, as a place that people want to visit.”

Paul Poberezny retired from EAA as president in 1989, but lived just a couple of miles from EAA headquarters.

About 1/2 million aviation enthusiasts from all corners of the state, across the nation, and 60 countries gather in east central Wisconsin for AirVenture, bringing an estimated $110 million in economic impact to Oshkosh-area counties each year. Wittman becomes the busiest airport in the world for the week of AirVenture.