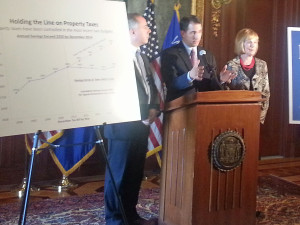 Governor Scott Walker is asking the Republican-controlled Legislature to move quickly on a proposal that would cut Wisconsin property taxes by $100 million.

Walker unveiled the plan Thursday, at a press conference where he was joined by Republican leaders in the Legislature. The governor says the plan would bring “tax relief for working families, for senior citizens, for farmers, and for small business owners across the state,” adding that it would result in the third consecutive year of property tax reductions for a median value home in Wisconsin.

The tax cut would be paid for out of money from a state budget surplus. It would result in property taxes on a median-value home dropping by about $13 on December tax bills, while a projected 2014 increase would be reduced by about $20. When combined with other reforms and property tax controls enacted since he took office in 2011, Walker says the typical homeowner will have saved $680 during his four years in office. The money would be directed at the school aid formula, which would help lower property tax levies.

Democrats expressed some skepticism about the proposal. Assistant Assembly Minority Leader Sandy Pasch (D-Shorewood) says too much remains unknown and “the devils in the details on all of this.” While she agrees with a tax cut in theory, Pasch says she wants to have a better understanding of how the bill would actually impact finances for schools and the state.

The proposal comes just days after a possible Democratic candidate emerged in the race for governor, former Trek Bicycle executive Mary Burke. Burke told reporters in Green Bay Thursday that she favors lowering taxes while supporting schools, but “I’d have to make sure that it really is doing just that, and it’s doing it in a way that’s fiscally responsible and balancing the budget.”

The governor has ordered the Legislature into a special session next week to take action on the proposal. Republican leaders expect to hold a public hearing and pass the bill out of committee by Tuesday of next week, with possible action from both chambers coming by the end of the month. Walker says the bill needs to be passed quickly, so it takes effect in time to show up on property tax bills that go out in December.