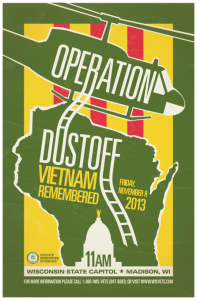 John Scocos is agency secretary. “We expect over 500 veterans … we’re kicking it off at 10 a.m. with a motorcycle rally of American Legion riders and combat veteran riders.” And Scocos says they expect over 150 riders to partake in the motorcycle rally led by military veterans on the Capitol Square. The rally includes former state Senator Dave Zien.

A commemorative bronze plaque honoring veterans who served in the Vietnam War will be unveiled at the ceremony. Governor Walker will speak at the event, along with other dignitaries and veterans. U.S. Department of Veterans Affairs Deputy Assistant Secretary of Intergovernmental Affairs John Garcia, is a scheduled speaker, as well as Vietnam veteran George Banda (101st Airborne, Silver Star recipient), and Vietnam Veteran and Medal of Honor recipient Gary Wetzel (173rd Assault Helicopter Company).

After the ceremony, the Wisconsin Veterans Museum on the Capitol Square will have an open house where visitors can view a new Civil War exhibit. There will also be a special taped tribute at the Museum by former Defense Secretary Melvin Laird starting at about noon.

More than 165,000 Wisconsin men and women served in Vietnam, 1,239 paid the ultimate sacrifice.

The event will be held on Friday at the State Capitol in Madison. Motorcycle rally at 10a.m.; ceremony at 11a.m. This event is free and open to the public.

President Obama had proclaimed May 28, 2012 through November 11, 2025 — a 13-year observation — as the Commemoration of the 50th Anniversary of the Vietnam War to honor Vietnam veterans, the fallen, the wounded, those unaccounted for, former prisoners of war, their families and all who served. The WDVA has joined the Vietnam War Commemoration as a commemorative chair.