You are here: Home / News / ‘Parking parity’ for disabled bikers 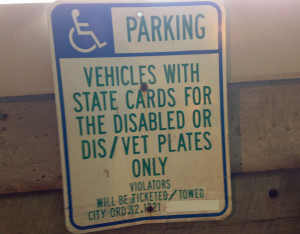 Handicapped parking – for motorcyclists? That’s the idea being proposed by state Senator Frank Lasee (R-DePere), who wants to give parking parity to those bikers who may also be handicapped. “We became aware that motorcyclists can’t get a handicapped sticker or hanger,” Lasee said, explains that many riders have the same sorts of disabilities which qualify drivers to receive them.

Lasee will introduce a bill giving motorcycle passengers or drivers, as long as they fit the established medical criteria, the same access to the blue disabled tags as someone using a car. “There’s a variety of handicaps where you could ride a bike, but still need to be close to a building, for walking purposes,” he said.

Lasee said he didn’t write this with former colleague Dave Zien in mind, but noted that the veteran Harley-Davidson rider is a perfect example of someone who could benefit from it. Zien, who represented the Chippewa Valley in the Senate until 2007, lost a leg in a 2011 crash in Florida.