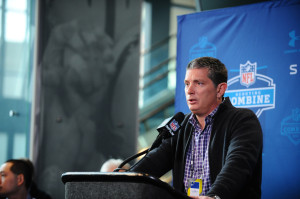 Five head coaches and one general manager are out of work today, one day after the end of the NFL regular season.In Detroit, the Lions fired Jim Schwartz after five seasons at the helm.  The Lions got off to a good start this season, winning 6 of their first 9 games.  But the Lions fell on hard times in the second half, dropping 6 of their last 7 games.  Schwartz led the Lions to the playoffs in 2011 but finished 7 and 9 this season.

In Minnesota, the Vikings let Leslie Frazier go after a 5-10-1 record this year and a 21-33-1 mark in 3-plus seasons.  The Vikings missed the playoffs this year after making the playoffs a year ago.  What didn’t help Frazier was the Vikings defense, which finished 32nd in the league this season.

In Cleveland, the Browns parted company with Rob Chudzinski after just one year on the job.  The Browns are reportedly still on the hook for $10.5-million of Chudzinski’s contract.  Cleveland finished 4-12 this season but dropped seven straight games.

In Washington, Mike Shanahan’s Redskins finished 3-13, dropping their last 8 games.  That was more than enough for owner Daniel Snyder to send Shanahan packing.  Shanahan’s 24-40 record over the last four years is the rest record among the other teams in the NFC East.  The Redskins dropped 10-games or more in 3 of the last 4 seasons.  Since buying the team 8+ seasons ago, Daniel Snyder’s Redskins are 104-136.

In Tampa, Greg Schiano was fired after two years on he job.  His general manager Mark Dominick was also fired.  Dominick spent five seasons in charge of the football operations, but the Bucs finished 28-52 during that time.  Schiano started 6-4 in the first 10 games in 2012, but the Bucs went 5-17 since then, one of the factors in his firing.