Mason Crosby almost kicked himself off the team in 2012, making just 21 of 33 field 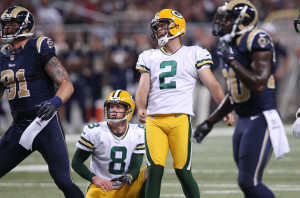 goals.  The Green Bay Packers coaching staff lost all confidence in their kicker and in several situations opted to keep the offense on the field on 4th downs because they didn’t trust Crosby to make a kick.

Crosby even had his contract restructured.  His base went from $2.4-million to $800,000.  The Packers in effect asked Crosby to earn his money back and that’s exactly what he did.

The challenge didn’t stop with his contract either.  The Packers brought in Giorgio Tavecchio to compete with Crosby.  Then, after hitting just 3 of 8 field goals during the teams annual Family Night scrimmage, the Packers added another kicker, free agent Zach Ramirez.

Crosby held off the preseason competition and made his first 10 kicks.  He finished out by making his last 16.

When Crosby has had competition in training camp, he’s had his best seasons.  It’ll be interesting to see if the Packers bring in another kicker in this summer’s training camp to compete with Crosby, or at least keep him on his toes.

AUDIO: Crosby is greatful for the opportunity :19

AUDIO: Crosby had something to prove and he proved it :14