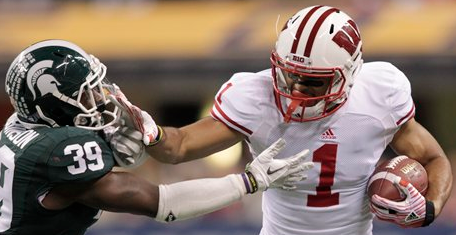 December 3, 2011.  The Badgers headed to Lucas Oil Stadium in Indianapolis for the first ever Big Ten Championship game in the conference’s 115 year history.  15th ranked Wisconsin had met 11th ranked Michigan State once earlier in the season with the Spartans claiming victory on a last second “Hail Mary” pass play 37-31.

The Badgers scored first, but the lead didn’t last and the Spartans managed to stay on top into the second half until just under four minutes to play.  That’s when Badger quarterback Russell Wilson threw one up for grabs on 4th down and Jeff Duckworth  came down with a 36-yard reception setting up Wisconsin’s game winning touchdown, a 7-yard run by Montee Ball with 3:45 left to play.

Coach Bret Bielema had this to say about the play, “To get the satisfaction to beat Michigan State, to earn our way there, a common saying that we’ve been using…is those who have been humbled will be exalted, those who have been exalted will be humbled, and I thought that play right there gave justice to everything.”

The 42-39 win earned the Badgers a birth in the 2012 Rose Bowl, the second of three straight appearances for Wisconsin.