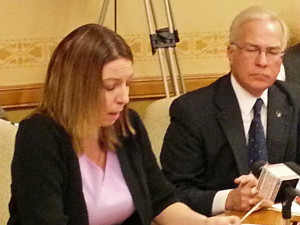 Sherry Anicich testifies on a bill that would remove voluntary intoxication as a defense in murder trials. (Photo: Jackie Johnson)

Murder suspects would no longer be able to argue they were too drunk to know what they were doing, under a bill being fast-tracked at the Capitol.

Lawmakers heard testimony Thursday on legislation that would remove voluntary intoxication as a defense in murder cases. Sherry Anicich says that defense kept her daughter’s killer from being convicted last year, when a Wood County jury dead-locked on homicide charges against Brian Cooper.

Cooper was charged with killing 21-year-old Alisha Bromfield at a Door County resort in August of 2012, while the two were attending Cooper’s sister’s wedding. He allegedly confessed to strangling and raping the pregnant Illinois woman in a 911 call, but later claimed he was too drunk at the time to have intended to kill Bromfield. “With all of the evidence presented, it was horrifying and disappointing that this was not a unanimous verdict,” Anicich testified, adding that the current provision in state law has prolonged her pain and suffering.

During a hearing at the Capitol, lawmakers heard from a long list of family and friends asking for the change in state law. Cooper’s own sister, Kellie Stryker, called the hung jury last year “the ultimate injustice” and urged lawmakers to stop alcohol from being used as an excuse for these types of crimes.

Cooper was convicted in June of last year on a single count of sexual assault. He’s scheduled to be re-tried in May on the homicide charges. The bill would not apply to his case, although supporters argue it would stop others from using the defense in the future.

A committee vote on the bill is expected next week. Several lawmakers on the panel considering the legislation indicated Thursday they hope to see it pass quickly through the Legislature.