You are here: Home / Agriculture / Father and son charged with poisoning bald eagles 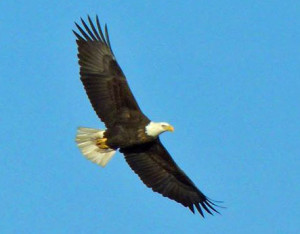 A father and son from Onieda County have entered into plea agreements after being charged with illegal possession of bald eagles. Alvin Sowinski, 65, and 46-year-old Paul Sowinski were charged under the Bald and Golden Eagle Protection Act for the death of the birds by poisoning.

The eagles were not the only casualties of the poison. Department of Natural Resources wardens found that Alvin Sowinski was using the insecticide Carbofuran, to kill wildlife on their family farming operation, which has about 4,000 acres tilled and another 4,000 acres not in production.

U.S. Attorney John W. Vaudreuil says the Sowinski’s have agreed to pay $100,000 in restitution and lose all rights and privileges to hunt, fish and trap for a period of not less than five years. The government reserved the right to request that the Court impose extended revocation of the hunting, fishing and trapping privileges. Plea hearings are scheduled for May 8th before U.S. Magistrate Judge Stephen Crocker.

In May 2007, a DNR warden found a dead bald eagle and other dead wildlife within 100 yards of a deer carcass, which was found to contain the insecticide Carbofuran. During the 2010 execution of warrants, investigators found numerous dead birds and small mammals. Several other dead animals found in another area included two bald eagles, a black bear, two ravens, and a coyote. All of the animal deaths were traceable to Sowinski’s poisoned animal bait.