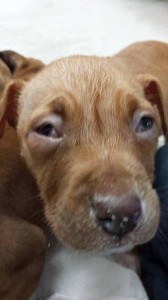 Tuesday was a good day for three 6-week-old puppies that were doused with bleach by a young Fond du Lac boy. Animal Shelter Manager Renee Webb said the puppies received an injection Sunday night to help them breathe. They suffered chemical burns to the face and eyes, but fumes from the bleach cause ulcers in the mouth and throat and inflammation of the lungs. Webb said it will take about five days for the puppies in their fight to survive while antibiotics do their work. “We’re going to see a lot of up-and-down over the course of about the next five days,” Webb said, adding that the pups were active and hungry.

“We did order feeding tubes, just to be prepared in the event they decide they are not going to eat, we can still continue to feed them for the chance to get to the point where the antibiotics are going to work, and for them to heal,” said Webb.

Charges are being brought against the boy and his mother, who allegedly was aware of what happened but didn’t do anything about it. Meanwhile the Fond du Lac Humane Society is in need of canned puppy chow and powdered milk replacer to help them in their struggle.

Fond du Lac police reports indicated that one of the puppies was found in a dumpster at an apartment complex after a neighbor heard it crying. The puppy may have nipped the boy while he was playing with it. The child apparently poured bleach on the puppy and splashed another with it before putting the puppy in a garbage bag and placing it in the dumpster.