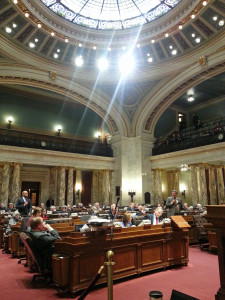 Representative Chris Danou is a Democrat from Trempealeau. “Spare me the sanctimony and the pieties and let’s get on with the bill. At least we’re gonna do something good. We’re not doing it for the right reason, but at least it is something half better than what we were.” Danou continues, “But let’s not pretend it’s anything other than the fact you were shamed into doing this.”

Representative Tom Larson is a Republican from Colfax. He takes offense to accusations of being “shamed” into voting on the legislation. “Six years ago I sat in a room and I held my daughter’s hand when she took her last breath.” Larson’s emotional account continues, “Don’t tell me that I have to be shamed into signing this bill. You know better. All of you know better.”

Assembly’s amended version of the bill, which caps co-payments at $100 per month, was passed by a vote of 75-18. The bill needs concurrence in the Senate before Governor Walker can sign it into law, which he has indicated he would.

The Senate meets on April 1st for its last day of this legislative session.