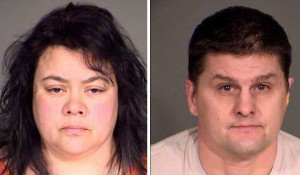 Child abuse and neglect charges have been filed against a Fond du Lac couple. Jeana and Troy Riehl, who are both 46-years-old, made their initial appearance in Fond du Lac County Court Thursday morning.

According to the criminal complaint Jeana Riehl’s abuse of two boys occurred over a period of a couple of years. It allegedly included beatings with a horse whip, hunting arrow and rolling-pin, withholding, food and locking the boys in a bedroom or bathroom for extended periods of time. She is charged with five counts of physical abuse of a child and six counts of child neglect.

Troy Riehl is accused not of participating in the abuse, but for failing to prevent it. He faces six counts of party to the crime of child neglect and two counts of failing to act to prevent harm. Bond for Jeana Riehl was set at $5,000 cash and $500 signature bond was set for Troy Riehl. Both are scheduled for a preliminary hearing on March 21st.