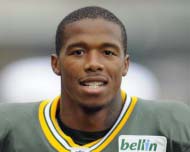 and the Green Bay Packers before the start of free agency on March 11th.

The two sides have been in contract discussions for a while but haven’t been able to find much in the way of common ground.

The fact that the salary cap is going up around $10-million could be the reason for the lack of a deal.  The increase means the Packers have roughly $35-million to spend which could mean that Shields agent, Drew Rosenhaus may have upped the price.

If the Packers wind up losing Shields, they’ll likely be able to find a replacement early in the draft.  It’s also possible that the Packers could get an experienced corner in free agency at a lower price.

Letting Shields get to free agency is probably a gamble for both sides.  Shields could wind up settling for less than the Packers are currently offering.  There’s also a chance Shields could find more money in free agency and leave.

The cornerback market is fairly loaded from a free agent standpoint, which could mean much of the big money may be gone before Shields gets an offer from a team.

Drew Rosenhuase can begin negotiating with teams on March 8th but can’t sign a contract with anyone until March 11th.