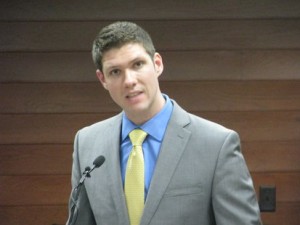 The mayor of Wisconsin Rapids could face felony charges for posting a picture of his ballot to a social media site.

Mayor Zach Vruwink posted photos to his Facebook account in February showing that he had already voted absentee. The photos showed his voter number, the clerk log showing it was his number, and a photo of his completed ballot. That’s where the problem lies. According to the Government Accountability Board, voters are not supposed to publish photos of their completed ballot.

Vruwink says he was not aware of the law, and removed the photo from Facebook Wednesday afternoon. “I pulled the photo down immediately, and then I also called the Government Accountability Board to self-report and let them know that the photo had been taken down, and that I had just become aware of the law that was related to marked ballots and taking a photo of them.”

City Council candidate Steve Abrahamson filed the complaint against Vruwink with the district attorney. Vruwink says District Attorney Craig Lambert has received the complaint but has not reviewed it yet.

The race for Wisconsin Rapids Mayor has been hotly contested, with Vruwink facing a challenge from former Mayor Mary Jo Carson. Vruwink says he’s hoping to focus on the city’s issues until April 1st. “It’s very enlightening to know that law and so, I responded appropriately and definitely look forward to pursuing the campaign and making it about the issues.”

Government Accountability Board director Kevin Kennedy was not available to comment Thursday, but he has weighed in on this issue before. Kennedy said in a 2012 statement, “In an age of social media where some people share pictures online of everyday things they do, that voters should not take pictures of their completed ballots, let alone post them Facebook or Twitter. Under Wisconsin’s election fraud law, it is a Class I felony to intentionally show your marked ballot to any person,” adding, “Don’t tweet your ballot.”