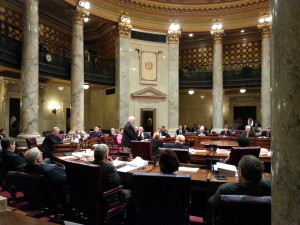 The state Senate passes a bill legalizing a drug that could improve the health of kids suffering from seizure disorders.

An extract from marijuana called cannabidiol, or CBD, helps to reduce seizures in children. State Senator Mike Ellis (R-Neenah) says this bill will bring some sense of peace to the parents and grandparents of children who are suffering unnecessarily.

“We have people in my district that have to travel across the country to get cannabidiol so that they can come home. And since they’ve been doing this, the seizure rate on this child … has been diminished tremendously.”

Ellis calls this breakthrough medical treatment a “gift” that shouldn’t be politicized. He says doctors he met with in his district support this bill “100 percent.”

Senator Bob Jauch (D-Poplar) says it’s “very satisfying” to realize that this is one of the last bills on their legislative session.

“Because this is whey we’re here. This becomes the purpose in serving the public good, to make sure that we can do something that might improve the quality of life for people whose names we don’t know, faces we’ll never meet.”

The Assembly already approved the bill, which is on its way to the governor’s desk.