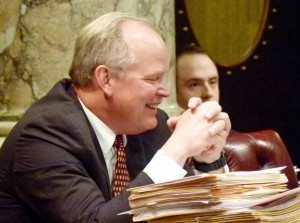 Together, the four senators have 94 years of state legislative experience. Senator Dale Schultz (R-Richland Center), who was first elected to the Assembly in 1982, says he’s had “one heck of a ride.” He also talks about the privilege of making some good friends at the Capitol.

AUDIO: Schultz gets the chamber laughing. :15

Bob Jauch (D-Poplar) was also elected in 1982. “As I reflect upon the best moments of the past 32 years, it is those times when we work together because our contribution made a difference in making northern Wisconsin a better place.”

AUDIO: Thanking family for their support over the years was a common theme among the lawmakers, including Jauch. :22 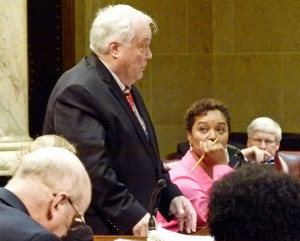 John Lehman (D-Racine), the junior of the retiring group, was first elected in 1996. He says he’s blessed to have the support of his family during his time in office. “There’s a wife back home whose name never gets in the headlines, you know, they don’t get in the Blue Books or anything like that. By my count, Cathy, my wife, has gone through 14 elections.” And, he says, she doesn’t even like politics. Lehman plans to run for lieutenant governor.

Tim Cullen (D-Janesville) was first elected to the Senate 40 years ago before taking a break (from 1987 to 2011) and then returning. He says he enjoyed building friendships at the statehouse, but it’s time to go. Cullen says he’ll finish his book, and jokes that his colleagues can pay him a fee not to be mentioned in the book.