You are here: Home / News / Trooper recovering after loss of leg 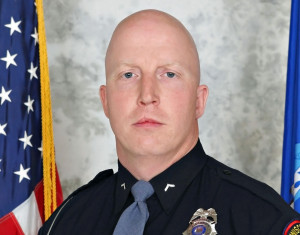 A State Trooper is making progress, after being struck by an SUV at the scene of an accident on Highway 41 near Neenah. Trooper Jason Hansen lost his right leg below the knee and broke his left leg, when the vehicle slid out of control and pinned him against his squad car in the January incident. Hansen is learning to walk using a prosthetic leg, and hopes to return to patrol as soon as possible.

“Everyone adapts differently to prosthesis, and I’ve been doing very well, I’m actually probably a little more ahead of schedule than I would have estimated at this time,” Hansen said. “I’d like to be back sometime early 2015.” Hansen said he’ll be able to come back for light duty even earlier than that.

State Patrol Captain Nick Scorcio said officers face serious dangers whenever they pull someone over or respond to a crash. “It is a very dangerous environment that they’re working in. We’ve had may cruisers totaled out, we’ve people severely injured, we’ve had people killed,” Scorcio said, adding that the accident which injured Hansen shows how important it is for drivers to move over, when they see an officer on the roadside.

“Sometimes people are just being inattentive, they’re engaged in doing something else in the car, their minds are elsewhere. And then there are some folks that maybe aren’t aware of the law, and some folks who just don’t want to be inconvenienced to change lanes,” said Scorcio.