You are here: Home / Environment / Conservation / An e-cycle reminder 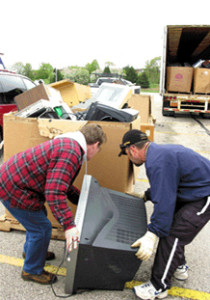 As the weather warms up and spring cleaning gets going, many Wisconsinites will be looking to get rid of old electronics that might be sitting around the house. Sarah Murray with the state Department of Natural Resources reminds residents it’s against the law to put those items in the trash.

State law requires electronics to be properly recycled, usually by being dropped off at one of numerous collection locations around the state. Murray notes that many smaller items, such as old cell phones, cameras, and batteries, can be dropped off at many major retail stores. Larger items, such as older model television sets and computer monitors, may require the owner to pay a fee to properly dispose of. You can find a list of drop-off locations by searching for “e-cycle” on the DNR’s website.

While it can be tempting to leave an old TV on the curb for someone to come by and pick up, Murray says you should avoid doing so. Rather than the entire TV being taken away, she says it’s more likely that someone will smash in the glass to remove any valuable metals that are inside of the set, leaving broken glass behind.

Since it started in 2010, nearly 150 million pounds of electronic waste have been recycled through the state’s e-cycle program.