For the second straight year, the Wisconsin women’s softball team will head west to compete in the Eugene Regional hosted by Oregon this Friday through Sunday, May 16-18.

UW will open regional play against Albany on Friday at Howe Field.  Oregon, the tournament’s No. 1 overall seed, will play Utah Valley in the other game on Friday.  The four teams will compete in the double-elimination format, with the winner advancing to the Super Regional round.

The Badgers (34-18) have never faced the Great Danes of Albany (30-10), who won their fifth American East Conference champion on Sunday, but Wisconsin holds a 7-0 all-time record against teams from the America East.

Wisconsin is 3-8 in its 11 previous NCAA tournament contests, with two wins coming last year in Eugene. 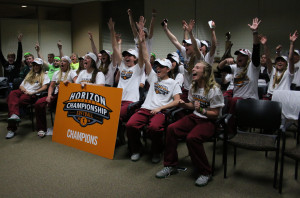 for the Twin Cities to face the University of Minnesota in the NCAA-Regional.

The Gophers earned the No. 16 overall seed and will host Green Bay, North Dakota State and Auburn in the regional.

This year, the Phoenix finished the Horizon League slate of competition at 11-5 overall, capturing the first conference regular season title in program history and the No. 1 seed in the League Tournament.

Minnesota is 41-9 this season and captured the Big Ten Tournament title with a 3-2 walk-off win over Michigan on Saturday.

North Dakota State faces Auburn in the other Regional opener.