You are here: Home / News / State law renamed in honor of young girl 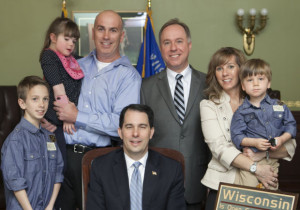 Governor Scott Walker has renamed a new state law in honor of a seven-year-old girl who died before she could benefit from it.

The law signed by Walker last month gave approval to the use of a marijuana-based oil for treating childhood seizures. The Governor on Wednesday issued a proclamation dubbing the measure “Lydia’s Law,” after Lydia Schaefer of Burlington. The governor also designated April 19, the girl’s birthday, as Lydia Schaeffer Day.

Schaefer died on Mother’s Day after a long battle with a disorder that caused her to have frequent seizures. Lydia’s parents took her case public in January, hoping to legalize some kind of help for their young girl. The new law approves the use of cannabidiol to treat cases in which some kids get dozens of seizures each day.

Lydia and her family were present when the governor signed the bill earlier this year. In statement, Walker said “We rename this law in her honor to keep her memory alive, and we pray that all children who are suffering find relief from their pain. Tonette and I send our deepest condolences to the Schaeffer family.”