You are here: Home / Crime / Courts / Sticking up for Wisconsin’s gay marriage ban 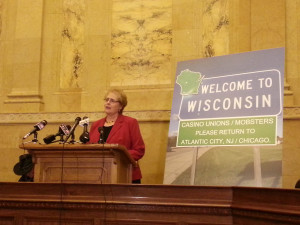 The head of a group that helped push for Wisconsin’s gay marriage ban says they will fight to keep it in place.

A federal court is currently considering a challenge to the state constitutional amendment, and Attorney General J.B. Van Hollen signaled last week that he suspects the judge will block the ban from being enforced.

Despite the possibility of a court order blocking the amendment, Wisconsin Family Action executive director Julaine Appling says they are not giving up the fight. “This is something people need to be educated on and I welcome the debate,” Appling says, “I don’t see it as inevitable, it’s not something we’re willing to roll over and play dead on, it’s something we believe with all of our being.”

The amendment banning gay marriage was adopted by Wisconsin voters in 2006, but those who favor overturning the measure say public opinion on the issue has shifted considerably since then. A recent Marquette Law School poll showed 56 percent of respondents support gay marriage, although Appling says “the polls are all over the map” and should not be used as a justification to overturn the will of voters.

Several gay couples challenged the ban in federal court earlier this year. A ruling in the case could come down any day, although Attorney General Van Hollen did file a brief last week asking that any order to overturn the ban be immediately put on hold while it is appealed.