You are here: Home / News / Wisconsinites warming up to toll ways to pay for roads 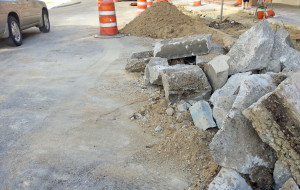 A new poll shows people love highways and dislike potholes, but don’t want to pay for construction and maintenance.

People are less willing to pay more taxes, borrow money, or take funds from other programs to upgrade Wisconsin roads, according to the latest Marquette Law School Poll.

“One of the policy potential possibilities is to stop funding transportion only out of segregated funds — the transportation fund dediated to that,” Poll Director Charles Franklin says. “Perhaps dip into the broader public revenues — income tax, sales tax, and so on.”

Over a decade ago, former Governor Jim Doyle had expressed his adamant opposition to installing tolls on Wisconsin raods. Now, with decreasing transportation funds, Franklin says he was surprised to learn people are willing to accept the idea of toll ways as a way to fund roads. “So, 56 percent (of 805 registered voters) said they would be willing to use tolls to pay for highways, 42 percent unwilling.” The pollster says, “Perhaps this linked to the fact that it’s in effect a use tax. If you don’t ride the road, then you don’t pay it. So it’s easy to avoid as long as you’re not out on those highways.”

Though, he says, tolls are not a very likely source of revenue as a practical matter. The amount of highways available for the installation of tolls is very limited. Despite the reluctance to dole out money for highway projects, the survey shows 71 percent of voters agree that “the economic benefits from good quality highways, railroads and airports outweigh the cost to taxpayers.” The poll shows 18 percent disagree and 11 percent say they don’t know.

A state panel is looking into alternative road funding sources, at a time when gas tax revenues are harder to come by due to today’s fuel-efficient and hybrid cars. DOT Secretary Mark Gottlieb says his agency needs an extra $600 million to do all the road work that’s planned for the two years ending in mid-2017.