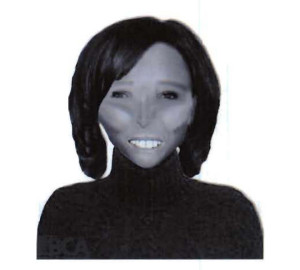 A composite sketch released by police of the woman identified as Jenny Gamez.

Investigators in Walworth County have identified the body of a second woman found in a suitcase in the Town of Geneva.

Police say the body of 21-year-old Jenny Gamez of Cottage Grove, Oregon was identified using dental records. Investigators are not saying what evidence lead them to uncover her identity, although Town of Geneva Police Chief Steve Hurley says her family did not report her as a missing person. Hurley says Gamez “had told her family she was moving and they thought, perhaps, she was on with her life.”

Gamez’s body was found on June 5 in a suitcase left near a highway, along with the body of 37-year-old Laura Simonson of Farmington, Minnesota, who was in a separate suitcase. Investigators believe Gamez was killed in Kenosha and Simonson killed in Rochester, Minnesota. Police believe Simonson was killed last November in a Rochester hotel room, while they believe Gamez may have been dead since late 2012 or early 2013. Hurley described the case as “one of the more horrific crimes that I’ve been involved in” during my more than 36 in law enforcement.

Walworth County prosecutors have charged 52-year-old Steven Zelich of West Allis with hiding the two bodies. Zelich told investigators that he met both women online. The former police office is currently being held on a million dollar cash bond and investigators have said he could face homicide charges in other areas.