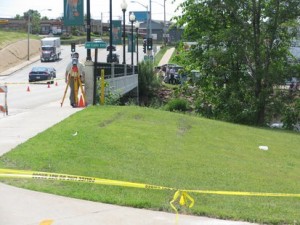 A vehicle was discovered in the Eau Claire River in Schofield Tuesday morning, just south of Wausau. Everest Metro Police Captain Clayton Schulz says once the vehicle was recovered, they discovered a victim. “We do have one male person inside.”

The investigation began just after 8:00 a.m. Tuesday, but they don’t know when the gold Lincoln Navigator sport utility vehicle entered the river. Schulz says they could not immediately tell if anyone was inside the vehicle because of the water clarity and the locked doors.

Officers handled the scene carefully, not knowing if it was a crash or a crime scene. Captain Schulz says the vehicle was discovered by a passerby, who ran to a nearby business to call 911. “No, nobody saw it go in. I did not speak directly to that individual, but he did jump in the water and did go under the water and could not access the doors because they were locked. Shortly thereafter, we arrived on the scene.”

The crash remains under investigation.