As we celebrate the founder of Earth Day, we are reminded not to take Wisconsin’s treasures for granted.

Putnam says state parks need attention and what he calls a “major infusion of budgetary focus,” saying, “Yeah, you know, we don’t have a crisis yet, but we’re really trying to avert a crisis.”

There are 80 “Friends” groups throughout the state, so it’s easy to get involved. Putnam calls on the nation’s youth to embrace Wisconsin state parks and help maintain them for future generations. “We know the interest is there. We know the parks get used by the younger set; but we also want them to take stock, participate, help out in their preservation and protection, invest in them a little bit.” 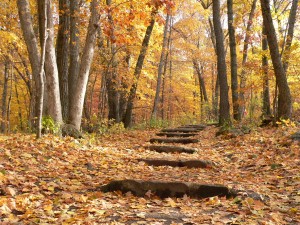 Currently, most volunteers caring for state parks are an aging population, Putnam says, and they are fully prepared to pass the torch along to “younger creative minds and stronger backs.” Putnam appeals to taxpayers, whose money partially pays for the parks and trails — along with sticker fees. “Take stock in what you already own,” he says. “Get involved or at least support those who are.”

AUDIO: Putnam talks about the economic impact of state parks. :35

Earth Day founder Gaylord Nelson would have been 98 years old today. Putnam believes the former Wisconsin governor, state, and U.S. Senator would be proud of their efforts.

“We like to think we embrace his overall mission of protecting the environment, making sure that it’s accessible to the maximum number of people who also have that environmental ethic. So it’s fitting that on his birthday we would be considering ways to continue to protect the resources and make them available to as many people as possible.”

Wisconsin currently has 66 state parks, covering more than 60,000 acres of land, and many trails throughout the state — available for biking, camping, hiking, hunting, or just enjoying the view.