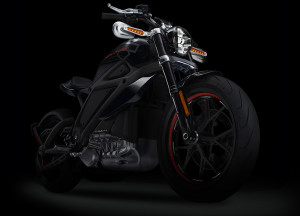 A new electric Harley-Davidson model could trade in the motorcycle’s traditional rumble for more of a jet engine sound.

The company plans to unveil a prototype of an electric bike next week during an event in New York. Harley has not disclosed the technical specifications, but riders shouldn’t expect the “potato potato” rumble that Harley’s V-Twin engines put out. Chief marketing officer Mark Hans-Richer says it should sound more like a “fighter jet on an aircraft carrier.”

Terry Doughty, who owns the Harley-Davidson of Appleton dealership, says the new model could appeal to traditional Harley riders, while also helping the company find new fans. He says the company appears to be looking to expand its market and access new customers.

The demo-bikes will be out next Wednesday night during a “Bike Night” event at Milwaukee’s Harley-Davidson Museum. The prototype will also be part of Route 66 tour later this year, stopping at 30 Harley dealers along the way.

Harley-Davidson currently plans to send a fleet of test vehicles out to dealerships across the country. Data from test drives will then be used to develop the final product. It may be several years before any electric motorcycles are made available for sale to the public.