You are here: Home / News / Walker says stance on gay marriage not relevant 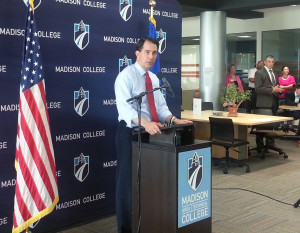 Governor Scott Walker says his current views on gay marriage are not relevant to the debate over a federal court ruling that struck down Wisconsin’s constitutional amendment banning same-sex unions.

During a stop at Madison College Monday, Walker maintained that “the governor of the state, no matter who it is, has no bearing on the issue” because it is currently in the hands of the federal court system. He says it will ultimately be decided there or by voters.

Walker’s likely Democratic opponent says it is relevant though. During her own stop in Madison on Monday, former state Commerce Secretary Mary Burke criticized Walker for refusing to make his stance on same-sex marriage clear. “I think the people of Wisconsin would like to hear what the governor thinks and I know, as governor, I’m going to be clear about where I stand on issues.”

Burke says the governor “seems to be waffling.” However, Walker says his refusal to state his current views on the issue is not about changing positions. He says Burke “needs to understand Government 101,” which is that the governor of the state does not have the power to arbitrarily change the constitution.

Also on Monday, Democrats in the state’s Congressional delegation sent a letter to U.S. Attorney General Eric Holder, asking that the federal government recognize all same-sex couples in Wisconsin who received marriage licenses since the ban was overturned. The letter asks that “Now that Judge (Barbara) Crabb’s decision has allowed many of them to obtain marriage licenses, the federal government should provide Wisconsin’s married same-sex couples with all of these federal benefits now available to them under the law.”