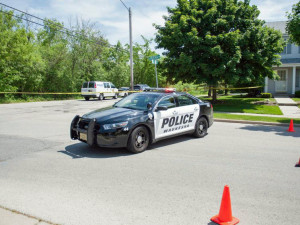 A 12-year-old girl is fighting for life, after being stabbed 19 times. Shockingly, the two suspects in custody are also 12-year-old girls, arrested soon after Saturday’s incident in a wooded area in Waukesha. Waukesha County D-A Brad Schimmel commented at a Madison stop in his race for attorney general.

“It’s a very shocking incident, there’s no two ways about it,” Schimmel said. “We knew from Saturday afternoon when this news broke that this was going to be something that the citizens of Wisconsin are going to be very frightened to hear described to them.”

Investigators believe the pair plotted the stabbing for months and were reportedly interested in a Web site with stories about horror and death. One allegedly held the victim down while the other stabbed her. She managed to crawl out of the woods and was found on the street by a bicyclist. She’s listed in stable condition.

The young suspects were charged as adults Monday afternoon in Waukesha County Court.