When Herb Kohl sold the Milwaukee Bucks to co-owners MarcLasry and Wed Edens, basketball fans in the state rejoiced.  Finally, an 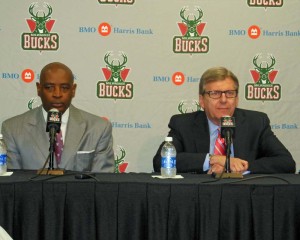 ownership group that will hopefully turn the Bucks into a winning franchise again.

The Bucks selected Duke’s Jabari Parker with the second overall pick and NBA fans in Milwaukee and Wisconsin continued to feel good about the future.

When ownership changes take place, it’s normal to fire the coach and even the general manager and start over.  But Lasry and Edens didn’t make changes right away.  They instead moved forward in discussions with Kidd while not once, sharing their intentions with GM John Hammond.

There are some that believe Hammond will eventually be relieved of his duties and Kidd will gain control of the Bucks both as coach and general manager.  The Bucks say they’re hiring Kidd to coach.  He’s expected to get a three-year deal ranging from 12 to 15-million dollars.  But don’t think for one minute that Kidd won’t eventually push for both jobs.

Just as troubling is the way Kidd handled himself since the end of the NBA season.  Even though he had no experience, Kidd tried to gain control of the Brooklyn Nets basketball operations, trying to oust Nets GM Billy King.  But the Nets didn’t bite and they eventually agreed to take two second round picks from the Bucks to rid themselves of their head coach.

In effect, the Bucks were interviewing a prospective head coach while they still had Larry Drew under contract.

Marc Lasry used to hold a minority stake in the New Jersey Nets.  That’s how he knows Jason Kidd.  Now the two are buds and Lasry in effect hired the guy he hangs out with.  With some, that may raise a red flag, considering Kidd’s character issues off the court after his involvement in a DUI case, as well as allegations of spousal abuse.

Certainly, Kidd could come to Milwaukee and be successful, at which time Bucks fans will forget Larry Drew and John Hammond.  Time will tell on that one.

The Bucks franchise had momentum on their side, but that momentum has slowed a bit.  It’s going to be up to Kidd to get that ball rolling again.