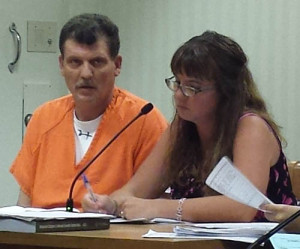 A 45-year-old Appleton man is facing a charge of attempted abduction, on accusations that he grabbed a bartender last Thursday night. Dennis Mitchell is accused of trying to put a plastic bag over the head of a bartender at the Eager Beaver bar while she was trying to walk to her car after her shift.

Court records say Mitchell was a “regular customer” at the west side bar on Thursdays, and some staffers called him “the creepy guy.” That night has been “Lingerie Night” at the bar, and Mitchell was asked in the past to stop taking pictures of the bartenders. Records say there was a receipt to a Walmart, in the bag, and investigators were able to get surveillance video of the suspect from the store. Mitchell was arrested last Friday, at the Fox Valley Warming Shelter.

Mitchell is also charged with soliciting prostitution for an incident in May near the bar. He’s accused of offering a woman money to have sexual contact with him.