You are here: Home / News / Net neutrality comments reach more than a million 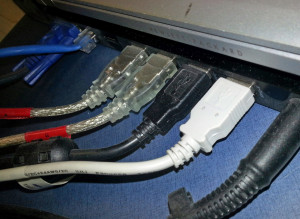 Comments submitted to the FCC on net neutrality reach more than 1 million as of noon on Thursday — the most ever for an FCC rule-making proceeding.

The Federal Communications Commission is ending public comments today on the proposed rules to regulate the Internet, at least in the first round. “They’ll have another round in a couple of months that allows you to comment on the original round of comments. So it’s not over by any means after Friday.”

The deadline to submit public comments in the first round of the FCC’s Open Internet proceeding was scheduled to end on Tuesday, but it had been extended until Friday.

Barry Orton is a professor of telecommunications at the University of Wisconsin – Madison. He argues net neutrality allows for free and equal access to the Internet for all users, but big business wants faster speed. Individuals will have a chance to reply to the initial round of public comments until September 10th. “The fight now is about how the Internet is going to be divided among the commercial users whose whole profit margin depends on the Internet running fast for them.”

Advocates of net neutrality say two tiers of Internet access makes winners and losers. Those benefiting from implementing two lanes on the information highway — a high-speed and a slower-speed — would be entities such as Netflix, Comcast, and AT&T. Orton says it creates a group of “privileged providers versus the rabble” — the common folk trying to become entrepreneurs, growing their businesses. “It’s better for everybody … everybody wins … as my hero Bruce Springsteen says, “Unless everybody wins, nobody wins.”

The debate has been going on nearly a decade.

Orton says, the fight is about two things: who gets to deliver their services the fastest and who gets to referee the fights between the companies — that would be the FCC, he says. The FCC is expected to establish new rules by the end of the year.

Gigi B. Sohn is FCC Senior Counsel for External Affairs for FCC Chairman Tom Wheeler. Follow her on Twitter @GigiBSohnFCC. Use the hashtag #NetNeutrality.