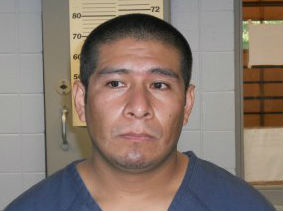 A man convicted of murdering a Plover woman is dead. Jose Luis Flores Aca pled guilty June 27th to first-degree homicide and first-degree sexual assault with great bodily harm for the strangulation death of his neighbor, Jamie Koch. Portage County Sheriff John Charewicz said the 33-year-old jail inmate died the same way Sunday night. “Corrections officers made their rounds, checked everybody. Immediately after the 11 o’clock check, an inmate attached a device to the wall, strung a two-inch strip of bedsheet around that device and his neck, and strangled himself.”

Charewicz said Flores Aca was somehow able to obtain a small, ordinary piece of hardware into the jail. “It was a two-inch screw, and we’re doing our best to track down how he came into possession of this because it’s nothing that matches anything that we use in the jail for securing anything.”

The Stevens Point Police Department is investigating the death. Flores Aca was scheduled to be sentenced for murder September 30th before Portage County Judge Thomas Flugaur. Flores Aca was facing a life sentence.