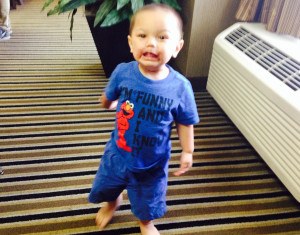 A Wisconsin family is seeking justice in the wake of a police drug raid gone awry. Alecia Phonesavanh’s toddler son Bounkham, known to the family as “Baby Bou Bou,” suffered grievous harm in the “no knock” May 28th raid by sheriff’s deputies in the town of Cornelia, Georgia, where the family was staying after their Janesville home was destroyed by fire. The deputies tossed a “flash bang” grenade into the home – and it ended up in the 20-month-old boy’s crib.

“His nose was literally detached from his face,” said family spokesperson Marcus Coleman. “His lip was split in several different places, he’s had reconstructive surgery since then. He was put in a medically induced coma for several weeks. He literally has a hole in his chest. Those are the physical damages.”

At a media session in Madison on Wednesday, Alecia Phonesavanh said doctors have said her son will require further reconstructive surgery. “I know they still have to go on the inside and reattach his nose,” she said while holding Bou Bou. Other than his obvious facial injuries, he’s a happy and active little boy, and his mom is hopeful he stays that way. “I’m hoping that no matter what, it won’t affect his confidence, it’s not going to give people an excuse to pick on him. He’s a very strong boy. He’s definitely a survivor.”

Attorney Mawuli Mel Davis said the sheriff’s department were criminally negligent. Their actions on the night of the raid are under investigation by state and federal authorities. “We will have to wait and see what the district attorney’s position will be, but we are very adamant that someone be prosecuted and held responsible for what they did to this family,” he said. “There are things that concern us about whether or not this situation will be fair, and that’s why we believe the more people around the country know about it, the harder it will be for anything to be swept under the rug.”

Davis and Coleman pointed out that the man who was the focus of the raid did not actually live in the home where the Phonesavanh family was staying, and that no drugs were located there. Additionally, the man was taken into custody without incident that same night, even though his alleged status as “armed and dangerous” was the supposed reason for the no knock SWAT team action.