You are here: Home / Health / Medicine / State criticized over decision on contraceptive mandate 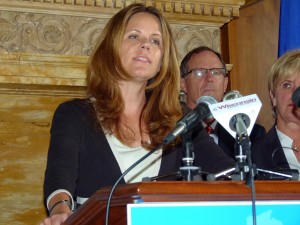 Advocates for access to birth control say Governor Scott Walker’s administration is improperly using a U.S. Supreme Court ruling as an excuse to not enforce aspects of a state law.

The state Office of the Commissioner of Insurance said this week it would stop enforcing portions of a 2009 state law that requires prescription drug plans to cover contraceptives, in the event an employer raises a religious objection. OCI claims it has no choice in the decision because of the Supreme Court’s recent ruling in a case filed by Hobby Lobby, which argued the mandate to cover contraceptives included in the Affordable Care Act infringed on the company’s religious freedoms. The nation’s high court agreed that closely-held companies could not be forced to violate their religious beliefs by paying for the coverage.

State Representative Chris Taylor (D-Madison) argues the ruling in the Hobby Lobby case has no effect on Wisconsin’s law though. The Madison Democrat, a former official with Planned Parenthood, says “Hobby Lobby concerned the interpretation of federal law. It does not impact our state laws.” She says multiple legal experts have looked at the issue as well and have come to the same conclusion.

Taylor claims Governor Scott Walker is simply using the Hobby Lobby decision as an excuse to continue chipping away at the reproductive rights of women. “He had no authority to unilaterally decide that this administration is not going to enforce a law passed democratically through the Legislature.”

Taylor notes that the move comes after previous efforts by Walker to repeal the contraception requirement have failed in the Legislature.

UPDATE: This story was edited after publication to clarify the specific circumstances of OCI enforcement of the contraception mandate.