You are here: Home / Fires/Accidents/Disasters / Urging safety first on the Fourth 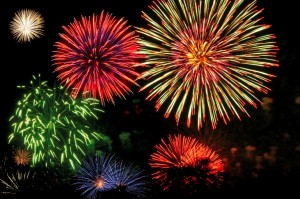 Fireworks can cause serious injuries and death if not properly used, especially among kids. Wisconsin Emergency Management’s Tod Pritchard says fireworks are best left to the professionals. He says in 2012 — latest available statistics– doctors treated 8,700 fireworks-related injuries in U.S. hospital emergency rooms. Statistics show 57 percent of fireworks injures were burns and 30 percent of those victims were under the age of 15.

About 18,000 fires are started by fireworks every year. If you must engage, Pritchard advises you keep the kids and pets at a distance, have water standing by, and focus on just one firework at a time.

The Department of Natural Resources (DNR) says most fireworks are illegal in Wisconsin state parks and forests. Sparklers and snakes are allowed, but rangers are discouraging their use because they’re fire hazards. The DNR says those who caught with illegal fireworks can be fined up to $200. Also, those who start wildfires are liable for the damages.

Another safety hazard in the summer is a warm vehicle. No matter how much he talks about it, Pritchard says people still leave their unattended kids and pets in scorching cars. When traveling to and from a holiday destination, never leave people or pets inside a parked car. Even with the windows cracked open, temperatures inside a vehicle can reach 100 degrees in less than 10 minutes.

Pritchard says it’s a good idea to have a first aid kit nearby, and a preparedness kit in your car.

Temperatures are forecast to hit the mid to upper 80s. Drink plenty of water and limit your alcohol and caffeine intake.

If you’re planning a trip, check 511wi.gov or call 511 for the latest traffic and road information on your route.