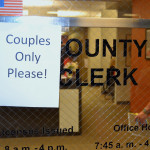 The 7th Circuit Court of Appeals has heard a challenge to Wisconsin’s gay marriage ban.

Katie Bellanger with Fair Wisconsin said the three judge panel had sharply worded questions for the state. “They focused most of their time on really pressing the state, on why the state had a vested interest in continuing to deny same sex couples the freedom to marry,” she said.

From my perspective it seemed to me that there were a lot tougher being given to the attorneys general representatives from both Indiana and Wisconsin,” said Julaine Appling with Wisconsin Family Action. But the other side may say ‘no, we got the tougher questions.’ On the whole I think the judges would say ‘we handled it fairly.’”

Appling said she observed a “denial of reality” in the Chicago courtroom during oral arguments in the Wisconsin case and a similar case from Indiana.

“The court and those attempting to redefine marriage denied the reality that every child born has a mother and a father, and that there are differences between men and women.”